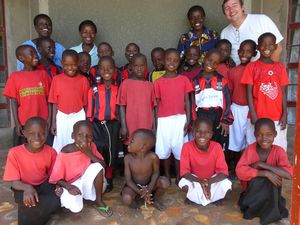 THANK YOU, because your monthly gifts has made this possible!!
It is only 3 months but look what has happened in that short time. We started out with the official opening of the children’s village in the first week. Just a few days after the children had reported to their new home away from home.
In this week most of them had their first experience of sleeping in a real bed with a real, moreover new, mattress! That same day they had to learn to use a toilet for the first time in their life. And they also discovered that water can come from a metal object called a tap. They must have been dead tired by the time they landed in that new bed for the first time with all those new impressions!
That same week they received many visitors, white skinned ones and all of them were friendly and spent so much time with them even though in their culture, an adult doesn’t spend much time with a child. They felt special, wanted, loved and for the first time in their life they felt how a child is supposed to feel: Welcome!
All these children are orphans. They have lost both their parents, mostly to AIDS. And when their parents died, the brothers of the father took all the furniture from the house and all possessions were divided amongst the brothers & uncles. They themselves were taken to some relative, whom they didn’t even know before that day.
In the house of that relative they were clearly a burden because they were continually being shouted at. The children were now beginning to understand their position in society and it felt like a slave. Unlike the other children in the home they could not go to school but instead sent to the well to collect water and firewood.
This went on until this pastor, who has a church in that village, came and talked to the uncle, the head of that household and suggested that there is a group of Christians in Osia, 7 Km away from Tororo, who take care of children like this one…
After Grace, the Director of the School in Osia did some research and found that indeed the child was an orphan and needy the child was given a school uniform and taken to the school in Osia.
Now they have been in class for 12 weeks and learned their first words in English. They have learned all kinds of other things as well and when they were send back to the village of their uncles and aunties and grandparents they were received as someone big. Yes, now they are on the way to become a learned person and so they are respected now.
They will stay in the village for the school holidays. We do this because we want them to retain their tribal and clan identity. We consider this very important for them.
So, here we are, almost beginning another new school term. But before we continue with the routine, we want to say to you: Thank you! We could not have done this without your help.
For more,Click Here