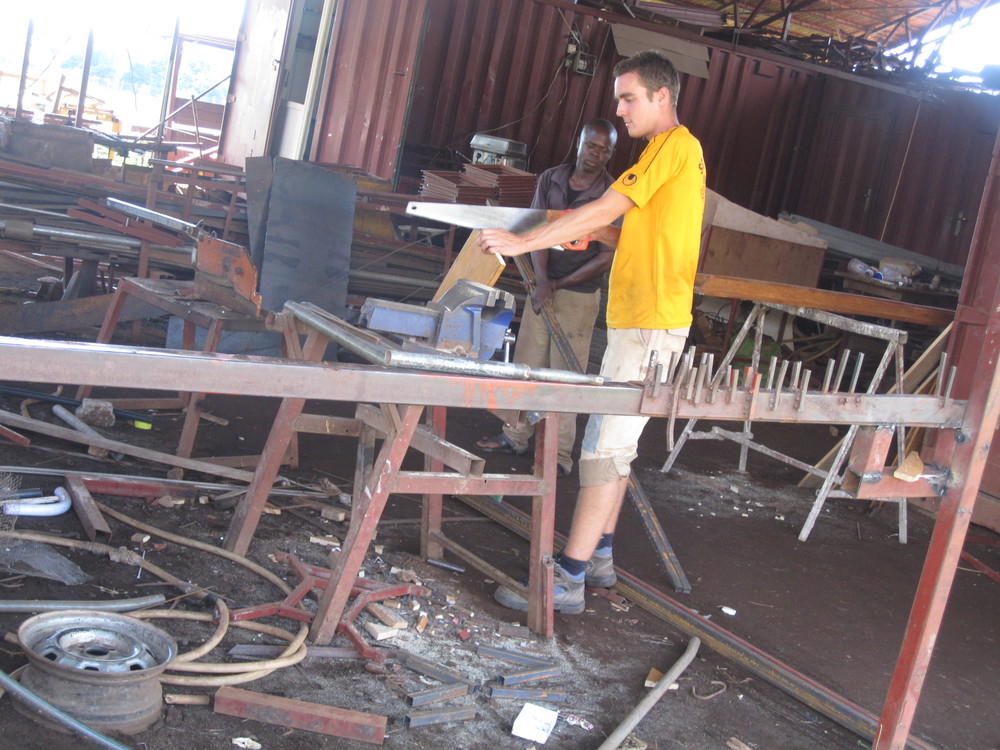 Kai Martin is a 25 year old volunteer worker, born in Bavaria Germany and a land surveyor by profession. He first heard about Heart for children from Pastor Jakobus Richter through his parents during a church service. It is from this talk about this organization accompanied with his desire to study more about cultures and learn how things work in different countries that made him quickly grab the opportunity of coming to Heart for Children as a volunteer.

He came to Heart for Children three months ago; from 25th April to-date. For the time he has been here, his efforts and contribution to the organization can not go unnoticed, we have seen him take part in a number of activities like, roofing the staff kitchen, planting trees around the school, digging up the trench for the water pipes, repairing broken tables, chairs and benches for the classrooms and the dinning, built draws for the Director’s new house and painted them,and also interacted with the children in different ways ; playing with them volleyball and one on one chat with them. He attributes his ability to do different types of jobs,his father who introduced him to this at a tender age. We must be sincere,Kai is a hard-working young man,simple and realistic.

Like any other person visiting a foreign country for the first time, he has had to deal with a number of challenges ranging from communication problems, both because the people he works with and those around the organization can not all speak English like he does and mostly due to the big cultural and traditional differences, he still faces a challenge with food; posho (Corn bread) with beans which is served daily as per the school menu. Besides the above, he also feels the accommodation is good but seems rather isolated especially because he stays in the group guest house which is good for many people is a little away from where the others are living.

However, he is positive about all this and goes ahead to appreciate the Directors for the opportunity to work as a volunteer since he has learnt a lot and is still learning more from the organization, he also feels that in some ways Uganda is a better place to be than the countries he has volunteered in, the people are open, social, hospitable; put a lot of value in family and relation, have an admirable lifestyle and nice people to work with. He appreciates the work environment and describes it as not being tense like it is in other countries like Germany and Europe at large;where people are rather serious and always busy with work and little time for socializing with one another and family especially. He also noted that life is much more relaxed and the weather is better.

In short, he thanked Uncle Jacob Doya for being tolerant,harmonious,honest and for always advising him and also advised his fellow Germans to take life a little more slow and relaxed because it is not healthy to sacrifice family and friends for material possessions and family time with machines. He asked them to learn to appreciate the value of family and relationships.

In his own words, “ I appreciate the privilege to be here, it is great to have this opportunity and it is a good thing to accept volunteers, Heart for children is a good place for people interested in learning about different cultures.”